New Year’s in the Philippines

December 31, 2011, Calamba City. – ‘Ka-BOOM!’ ‘Hiss’ ‘Pop, Pop, Pop’ – We were in my father’s hometown. It was early in the evening but the fireworks had already started. My Tita stuffed peso bills in our pockets and ‘the Chef’ and I scooted outside. We did not want to miss this. The sky was clear and a breeze blew over my skin and funny enough I got goose bumps even though it was a tropical 27-28 degrees. We walked to the back of the house and climbed the stairs to the empty balcony of the building next door. I was surprised we were the only ones out there. 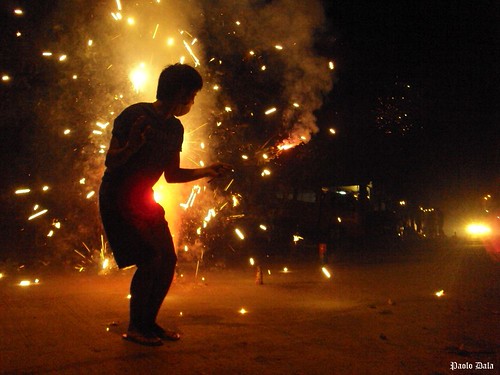 The city was spread out in front of us in an almost unobstructed 180 degree view. Puffs of white smoke slowly dissipated in the black sky, the smell of sulfur lingered in our nostrils. – ‘BANG!’ ‘Crackle’ ‘Whiz’ – Fireworks from everywhere big and small exploded against the night sky. We didn’t know what time it was but I kept thinking it was midnight because the fireworks built to what I thought was a crescendo but kept going and going until our senses were satiated by sound and light. I thought to myself, ‘This is freaking awesome!” Satisfied, we finally called it quits and went back into the house.

The table was set with a New Year’s meal – a big bowl of steaming soup, a dense, circular slab of puto (steamed rice cake), a pyramid of balut (boiled, fertilized duck egg), and a bowl of filled with grapes, longans and oranges – mostly round foods that would bring good fortune for the new year. Everyone wished each other a happy new year and we dug into the food.

As our heads hit the pillow I could still hear the distant ‘pop, pop, pop’ of distant fireworks as I drifted into happy sleep.

If you want to experience what it’s like in Manila just click on the YouTube video above. The next day we left on a plane for Palawan and marvelled at the haze and sulfur smell that still hung over Manila in the morning aftermath of the big celebration.

5 thoughts on “New Year’s in the Philippines”